A few months ago, my 2015 MacBook Pro began showing signs of failure. It wasn’t necessarily a “bad apple," but a growing list of concerns had begun to pile up and were slowly eating away at my productivity. The display would often become non-responsive; keys would temporarily stop working only to start functioning intermittently much later; and most concerning, the laptop would refuse to wake from sleep until power was cycled, forcing it to restart.

While retracing my steps in preparation to write this post, it seemed that I should’ve been worried. Truthfully, I was rather self-assured, confident that Apple would again do right by a loyal customer. After all, the AppleCare total protection plan I’d purchased while setting up the machine had several months remaining. I’d frequently brought in my devices for repair while living in Chicago, amassing a complex matrix of errors as a fast moving interdisciplinary artist; why would this be any different?

Arriving at the gleaming white Apple store, I realized my optimism was a mistake. My list of oddball concerns stymied the Genius Bar staff, which meant the device would need to be sent away. Twice. Several weeks (and at least one logic board) later, I would realize hardware malfunctions were being corrected by Apple technicians, only to reoccur with increasing frequency. Perhaps they could be resolved, although not by the teams I was interfacing with.

To say I was surprised is an understatement. In an instant, all of my reasons, personally and professionally, for repeatedly choosing Apple were slowly drying up. In the span of a few months, my confidence in both Apple’s design and repair processes had dropped to zero.

By mid August, I decided it was time to look elsewhere.

Stepping Outside the Walled Garden

Summer came and went. After typing on my wife’s new 13” Macbook Pro, I quickly determined that future models wouldn’t be an option, thanks to Apple’s now infamous butterfly key switch design. Travel on the new switches is very shallow, leading to unexpected impacts causing pain at the end of my fingers, even with minimal use.

With Apple out of the running, I began to seriously consider moving to Linux as my full time desktop OS. At first, I considered picking up Dell’s new XPS 13, a device beloved by PC developers everywhere, but I didn’t want conference call participants staring up my nose. Next, I began shopping Lenovo’s offerings. A few conversations at my local hackerspace told me one device was more prevalent among members than any other: the Lenovo ThinkPad X1 Carbon. 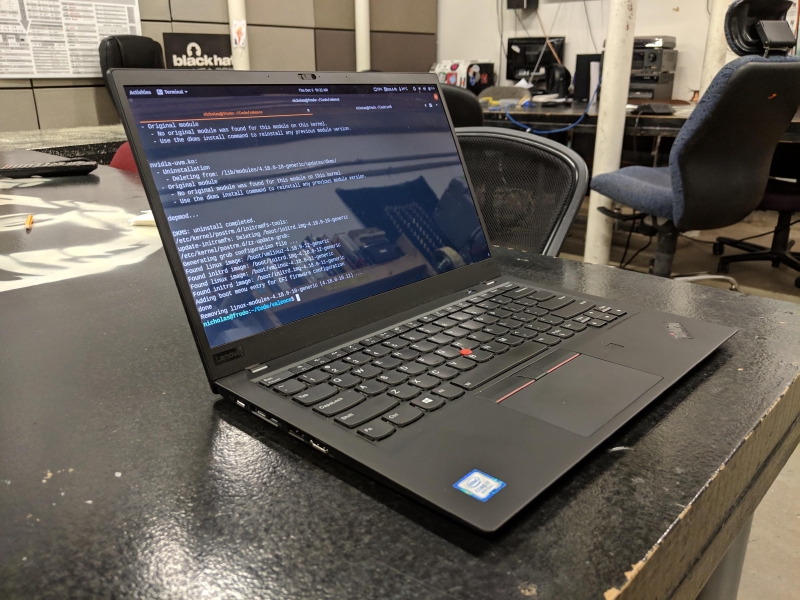 Had I remained in the Apple ecosystem, I would’ve entrusted Cupertino with making sensible choices for me, while I selected the highest performing MacBook Pro that fit my budget and continued working. Upon expanding my search options to the world of PCs, I realized the wider array of options meant further research was required.

Starting with the processor and graphics options, my exploration began. After some deliberation, I ordered a machine configured with the 4K HDR Dolby Vision-ready display, 2.80 GHz i7 8550 CPU (capable of boosting to 4 GHz), integrated Intel UHD 620 graphics, and a 256 GB NVMe SSD (which appears to be manufactured by Samsung). I opted out of Intel’s vPro configuration, as it seemed like a security hole without much benefit in my use. Ultimately, none of those specifications truly mattered, as most are available on ultrabooks from other manufacturers. I could’ve had the same hardware in almost any package. It was instead all about peripherals; I chose this laptop because of its keyboard.

Surprisingly, Lenovo has designed a keyboard worthy of the ThinkPad name inside a machine weighing less than 3 pounds. Actuation may be a bit stiff for some, at 2 grams. Keys, once depressed offer a generous 1.8mm of travel, which is enough to satisfy this keyboard nerd. In fact, writing medium length posts (like this one) on my X1 Carbon is the most satisfying laptop typing experience I’ve had in most of a decade. 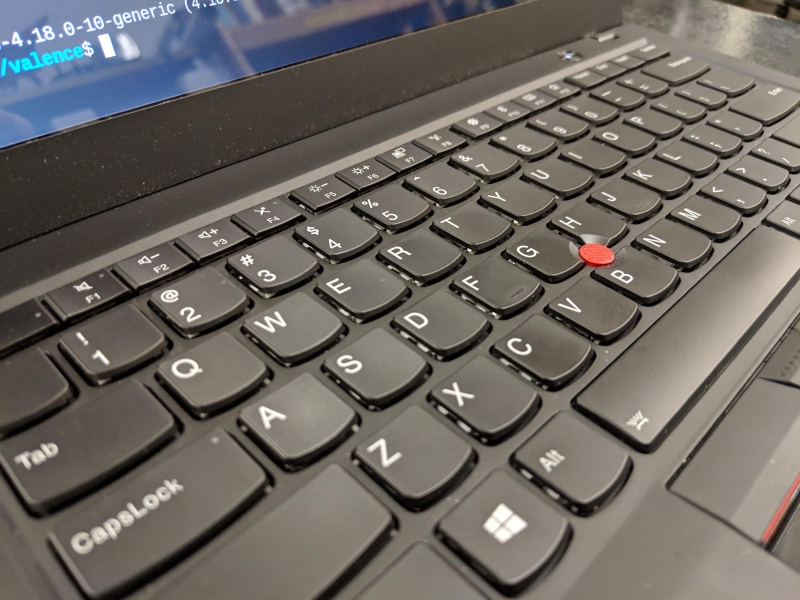 I made the switch mid-September, shortly after the Linux Application Summit (which took place here in Denver). Maybe it was the noticable absence of MacBooks at the conference, but for reasons not fully known, I left the event knowing Linux was in my future. One week later, I ordered my device.

Over the past several months, I’ve written more of both code and prose than I expected to. These realizations are pleasant surprises, especially when compared to the struggles of 2018, when my laptop seemingly couldn’t manage to function without incident for weeks, let alone months.

I started out my journey running Pop! OS, but I’ve since installed Ubuntu 18.04, 18.10, and the 19.04 beta. As of now, I’ve settled on Fedora 29. Since I’m choosing among various Linux distributions rather than running one blessed operating system, it’s yet another variable to consider and has a larger impact than you may think. Still, I welcome these choices. In future posts, I’ll dive into comparisons between various operating systems, focusing on how each popular distribution ran on my ThinkPad.

For now, I’m simply grateful that I have options, and I owe them all to becoming frustrated with Apple.