Several months ago, I received a message from a reader who asked how my recovery was going. Until then, I hadn’t realized my pre-occupation with newfound programming languages (namely Rust), writing technology reviews, and giving presentations during a large part of this past year. Looking back, I’ve written about nearly every other life activity and left my biggest challenge of the year unaddressed.

Today, I’m fulfulling a promise and discussing my experience after returning home from the hospital with fewer limbs than when I entered.

If you’re new to this journal, welcome. In October of last year, I checked in for elective surgery to amputate my right leg below the knee, following years of unbearable pain. I’m now writing you in August of 2019 with incredible gratitude. I’m especially thankful for my physical therapy and prosthetics teams; without them, I wouldn’t have progressed this far.

From December of last year until mid-February, I mostly focused on learning how to walk with my prosthesis; a process I found to be unexpectedly intuitive. Having dealt with loose joints and stretchy skin most of my life, I’m excited to have a solid foundation! In fact, I posted the following photo in May and invited friends to “guess which is my good foot?” after upgrading to a new energy-saving carbon fiber foot, the Ossur Pro-Flex XC. 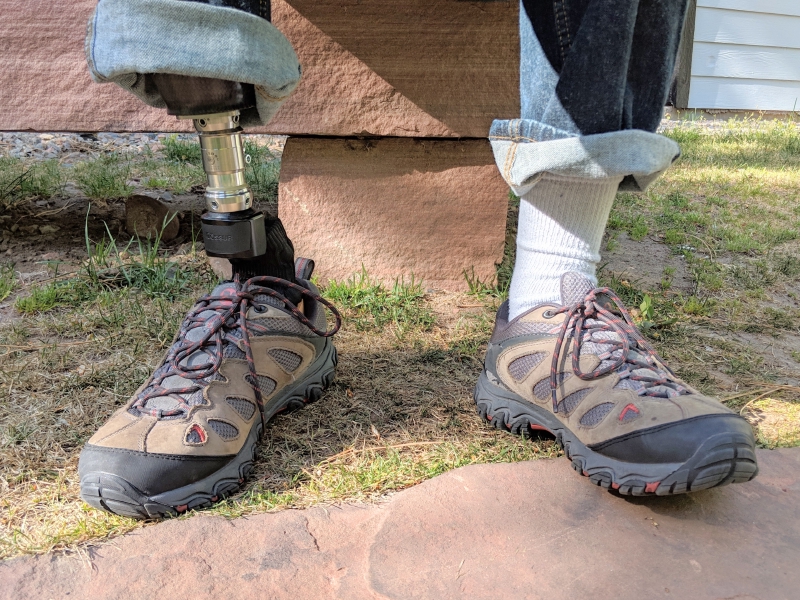 It should be said that the Pro-Flex wasn’t my initial foot. When I first received my prosthesis, the team had already installed an Ossur Talux, which would automatically level so long as I contacted the ground at a reasonable angle. I used this foot for several months before moving beyond the features it provided due to my naturally aggressive walking pattern. Compared to a Talux, the Pro-Flex foot is very rigid, which allows it to store energy while under load, before releasing it at toe-off: a welcome feature, since transtibial amputees expend roughly 20-40% more energy to ambulate when compared to people with two biological limbs.

Only a couple weeks after the above photo was taken, I felt confident enough to tackle a short hike with my family at Lair o’ the Bear Park. During May and early June, we tackled several miles of mountainous trail throughout the park, and I took every possible opportunity to climb!

Unfortunately, I often found increased pain and instability in my biological leg after these outings. Even so, being outside was incredibly beneficial to my mental health. Returning to an inactive life spent largely simply indoors wasn’t an option. I needed to find an outdoor sport vigorous enough to sustain my focus, while lessening impact on my lower extremities. Cautiously, I began exploring the world of adaptive cycling.

Pedaling Into The Future

Anyone who has followed my story likely knows that a cycling injury is what ultimately led to my amputation. It wasn’t the sole factor (Ehlers-Danlos Syndrome was a major contributor, also), but my genetic condition made the accident several times worse. Still, I enjoy the feeling of traveling under my own power and refuse to allow an accident to dampen my enthuiasm for the sport.

My first attempt at cycling was a total failure. After rolling around the neighborhood only to realize I was unable to keep my foot planted on the pedal. As a potential remedy, my wife, Susan, suggested a clever idea of wrapping both with short length of soft-backed hook and loop fastener. I thought it was genius! I set off up the trail a second time, and it worked excellent for a while. I was able to cycle several miles with my shoe affixed to the pedal, but when stopping, the system had a flaw: I tipped over and crashed into a tree while attempting to stop and dismount, unable to remove my foot from its restraint. I was unhurt, and frustration quickly turned to humor upon imagining how the scene must’ve looked to bystanders.

In my physical therapy appointment the following day, I discussed the fall and was recommended that I look at recumbent tricycles. As luck would have it, I had one of the nation’s most respected dealers nearby. On the next weekend, I paid them a visit. After a few minutes on the trike, I was sold: the comfort was unmatched by any diamond frame bicycle, and my feet could be safely clipped in. Without the need to quickly dismount, an entire class of safety concerns rapidly evaporates.

However, one major hurdle remained: cost. Recumbent tricycles aren’t exactly a mass-market product. Base models can easily run over $2,000, placing it well out of reach without financial assistance.

Fortunately, my physical therapy team came through again and put me in touch with the patient advocate who works alongside my surgeon. Together, we researched nonprofits that work with amputees, and ultimately decided to apply for a grant from the Limb Preservation Foundation’s Bloom Again Fund. It wasn’t long before I was informed that my request was approved! With a huge smile, I set off to order my new ride.

Named “Heatwave” and introduced to the world with a four mile out-and-back on the South Platte River trail, this 2019 Lava Red Catrike Trail has already taken me over 120 miles. I’m extremely grateful to the Limb Preservation Society for helping me return to a sport I love, even if it also took something from me. I hope, someday, to pay this gift forward.

Unfortunately, the progress I’ve made also brings new setbacks. Since mid-June, I’ve sought new ways to cope with the increasing pain and instability of my left knee, foot, and ankle. I’ll save further adventures in ambulation for a later entry, but it’s worth mentioning that surgeons may have trouble recommending bilateral amputation, regardless of previous outcomes and braces don’t always work as intended (it seems weird, but the cheap ones can function better than more expensive products).

During the next month, I need to ration my energy. Some days, you’ll see me on foot; but only for short outings where seating is always nearby. Generally, you’ll encounter me on wheels, likely relaxed. Until a better explanation is found, it’s reasonable to assume I’ve now worn out my left foot by adventuring with my new prosthesis all summer. Cycling strains my biological leg a bit less than walking, but causes pain regardless.

Raise a glass to chronic illness and all it’s forms, before I go test another drug that is contraindicated with alcohol.